Home > About Our Pastor > Pastor Bio 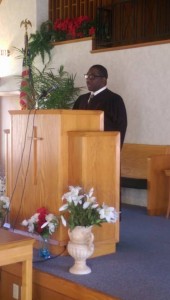 Pastor Prince Lee was born to the late Algie Lee and Lueendy Lee in Wilmar, Arkansas. He is the eighth of eleven children. In 1968, the family moved to the Twin Cities. During Pastor Lee's childhood, he attended community Baptist Church and participated in various children's programs. He later joined the Bethesda Missionary Baptist Church in 1988, where he sang in the senior choir and taught Sunday Class for teens.

Pastor Lee heard God's calling to the ministry in March 1989. Pastor Lee then received his license to preach the gospel in May of 1993. Pastor Prince Lee served as Associate Minister at Bethesda Missionary Baptist Church for eleven years while under Pastor Arthur Agnew's wings. Pastor Prince taught Adult New Beginning Bible Study and served on the Christian Education Board.

In June of 1996, Pastor Lee was ordained, receiving an Associate Degree in Art and Christian Studies, Bachelor of Science from Crown College, and a Master's degree in Theology. He later received training as Chaplain at North Memorial Hospital, Hennepin County Medical Center, and earned a certificate for Clinical Pastoral Education. Currently, he is enrolled in the Master Leadership Program at Crown College.

Pastor Prince Lee worked for the Billy Graham Ministry for eight years as a supervisor in the World Wide Pictures Department. He traveled both within the country and also internationally, where he spent 45 days in Amsterdam and other parts of Europe ministering the gospel of Jesus Christ.

Pastor Prince and First Lady Valerie have been married for twenty nine years and has two children Kristal (Rodney Sr.) and Herman, four grandchildren Tyler, Raven, Rodney Jr., and Aniya. In March of 2004, Pastor Prince Lee was asked to minister at Riverside Free Church. Later that year in September, the Lord led Pastor Lee to accept his calling as the Senior Pastor and has since been faithfully teaching and preaching the gospel to his congregation.